An incomplete story of a self-taught, multi-talented titan

I’ve long been fascinated by Benjamin Franklin, not just because he was one of the founding fathers of the United States, nor because he can be seen on the US 100 dollar bill. The interest stems from the fact that he achieved all the greatness in his life in spite of having very little formal education and having to quite literally teach himself skills which brought him all that success. To quote from a letter (included in the book) that someone wrote to him: “…you are ashamed of no origin; a thing the more important, as you prove how little necessary all origin is to happiness, virtue, or greatness.”

The book begins as notes to his son but quickly descends into too many details of his early life. I initially found the details interesting as they had a narrative feel to the “origin story” of Benjamin Franklin. But I soon found myself skimming past events that no longer seem relevant in today’s world. This book is, after all, almost two and a half centuries old!

What did impress me was the frugality and industriousness that was evident in Franklin’s life from a very early age. He first brought this ability of sheer hard work to teach himself writing and debating ideas. He later multiplied his knowledge, thus gathered, by associating and engineering gatherings of erudite people. The work ethic of simultaneously spending long hours at his printing business, reading and studying matters of public importance, discussing and debating with others and setting up of public institutions is immensely motivating.

What is disappointing and disgusting to read is the carefree manner in which women and Native Americans are badly treated and spoken of in the book. Nary a thought is spared for women who are left alone to bring up a child or the human rights of the indigenous people.

I was left a little underwhelmed by the time I finished reading this book. It ends literally mid-sentence and that is pretty much how you feel about the book as a whole. We only get a short look at the inventor and the diplomat, two aspects of his personality that I wanted to read more about. I guess I’ll just have to settle down and read the biography of Benjamin Franklin by Walter Isaacson that I bought a few years ago.

Books I marked as to-read after reading this book:

Read more about ‘The Autobiography of Benjamin Franklin’ on Goodreads. Buy the book here.

Title: The Autobiography of Benjamin Franklin

Book: Playing It My Way

I must begin by criticising the writing for it was such a big disappointment for a book that I began reading with much excitement. For a legend of the game, and one who I’ve admired since childhood, I often felt that the writing in this book was amateurish and did very little justice to Sachin’s great achievements and his memorable career. I have read Boria Majumdar’s columns in newspapers and even they seem better written in comparison. I wondered why someone of the stature of either a Ramchandra Guha or a Sharda Ugra couldn’t have been brought to the table to write this book. I also wondered how a publishing house like Hachette would’ve allowed such a book to go ahead. Perhaps they were certain that merely Sachin’s name was good enough to sell enough copies and no one would notice the sub par writing. (At one point in my notes while reading the book, I actually wrote “School boy-ish writing. Aargh!!!”)

What does work for this book, however, is the wave of nostalgia that will sweep through you if you’ve followed Indian cricket for the years that Sachin played cricket. I could not only recall scenes that I’d seen unfolding on a television screen but also headlines from newspapers of the Indian team’s exploits as I read about them in this book. Who can forget Sachin’s batting heroics at Sharjah or him taking five wickets in a match against Australia at Kochi and then juggling the ball with glee? How can I ever forget the heartbreak as I saw Sachin getting out to Saqlain Mushtaq in Chennai? A hundred memories like these are what I would like to remember this book for.

Another thing that impressed me in this book is Sachin complimenting and thanking all the people who have helped him throughout his career. From his coaches, to the support staff, his parents, his wife, his manager. Everyone gets a mention.

Something that surprised me, and has been written/talked about a lot, is how Sachin doesn’t talk much about the troubles that the team faced when match-fixing allegations were flying thick and fast. He is basically done with it in three or four sentences where he merely mentions how angry and upset he was. I can understand why he cannot reveal names or more such, but as a man who was in the eye of the storm (so to speak) this tells the Sachin fan very little how much the champion was affected by the scandal.

This inability to express Sachin’s anger and frustrations is also evident when describing the various injuries and resultant breaks and therapy that he had to undergo. Not only does the persistent back injury seem as if it wasn’t a big deal but even the tennis elbow injury is not made to sound threatening enough.

The book does become engrossing as he nears his retirement day. He is able to express in vivid detail the emotions he felt as he saw the noise around him reached deafening levels. It feels as if he were at peace with his decision of retiring and that is one thing a Sachin fan can feel happy about.

Overall, this book remains a disappointment. Sub par writing, anecdotes which don’t give you an insight into the inner world of players, funny anecdotes that fall flat, conveniently sidestepping the troubling times that Indian cricket saw in the last decade and a half are a big thumbs down for me.

Perhaps Saurav Ganguly’s (auto)biography, if and when that is written, will give us a better insight into arguably the greatest era in Indian cricket. Hopefully, that book will be like Saurav’s commentary: never holding back a punch.

Read more about ‘Playing It My Way’ on Goodreads. Buy it on Flipkart, Amazon.in or for your Kindle. 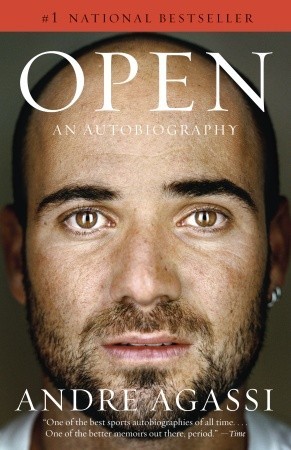 I hadn’t read an autobiography in a while, let alone a sports one. What tipped me towards reading this particular book was that it was highly recommended by a couple of friends who are avid sports fans themselves. In fact, one of them had insisted that she listed this book as brilliant.

I expected the book to be a simple narration of an athlete’s journey: his trials and tribulations, snippets from his personal life, the various battles that he had been part of on the tennis court. What I got, however, was an untarnished glimpse into the life and the roller-coaster mind of a flawed genius.

The book smashes all such ideas. And then some more.

Agassi shocks us by telling us how his father trained him since the age when he could barely hold a racket. Agassi hated the sport. As he grew up, he was, like any other kid, a rebel. What made things different for him was the focus on his life and his career. And that the rebellious kid’s every antic was being noticed and commented upon.

No doubt he  was made to work extremely hard on his game. But he was also clearly gifted. Yet, he continuously saw ups and downs in his career graph, most of which can be attributed to the demons in his head.

Agassi speaks honestly about his married life with Brooke Shields and how, even though it looked picture perfect, there were ominous signs right from the start. His subsequent wooing of Steffi Graf, however, makes for a delightful read and you cannot be any more pleased for a man to have finally found happiness after all that he has been through in his personal life.

There are also some great stories of friends, trainers and coaches who have had a significant impact on Agassi’s life. Each one of these injected a dose of positive thinking in his life when he needed them the most. Those chapters are very good motivational reads.

And then of course, there is Pete. “As always, Pete.” The one awkward rivalry-friendship that endures through the length of the book is that of Andre Agassi and Pete Sampras. Agassi admits as much. Sampras was definitely the more crowned champion, and perhaps with good reason. Agassi mentions how not bothered Sampras could be with the sport when he was off the court: how he could “switch off”. You cannot but admire the way Agassi speaks of his friend and arch-rival.

I have always loved tennis as a sport and will forever remain a Federer fan (GO FED!). But this book has made me look with new respect at Agassi and at what is perhaps the loneliest sport out there, as he mentions in the book.

Bring on the Sampras autobiography, I say!

Read more about Open on Goodreads. Get it on Amazon.in, Flipkart & on your Kindle.