A friend asked me yesterday which were the 10 best books that I’d ever read.

I do not know if there is a task known to man that is more difficult than this.

I definitely cannot make a list of top 10 books that I’ve read, not only because I’ve read so many wonderful books over the years but also because I know there are certain books out there that come highly recommended by friends and people whose opinion I respect that I haven’t read yet. Any of these books could be life changing and hence, I think it is way too early for me to recommend the 10 best books that I’ve *EVER* read.

However, in the spirit of not disappointing the audience, here’s a list of 10 books (in no particular order) that I read last year that I really liked. 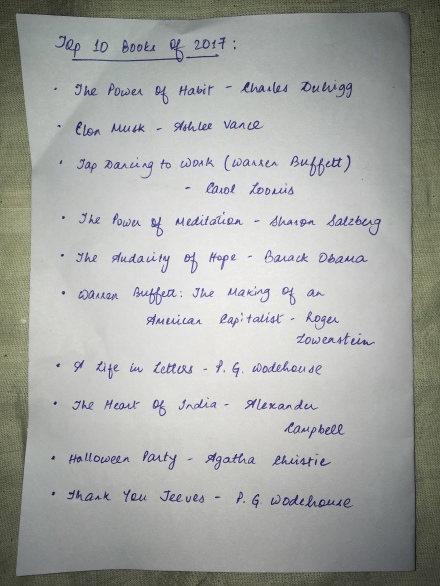 When Barack Obama was elected the 44th President of the United States of America, he kindled hope not only in America but across the world. This book outlines the basis of that hope.

Obama argues that in spite of their differences, Americans want the same basic things: jobs, good education for their children and a safe, free environment. And then there are the challenges created by the ideological differences between the two major political parties, the manner in which laws are created and how the legislature works. Not to mention the social and economic challenges brought on by globalization. In ‘The Audacity of Hope’, Obama confesses to not knowing all the answers but does outline a road-map that he says can take everyone ahead.

What I particularly liked about this book are the lucidly explained ideas. Even as someone has never followed American politics in great detail, I was able to grasp most of what was being explained about the legislature. This isn’t a book heavy with details and complexities of how the legislature works but gives us a peek into the lives of U.S. Senators and how they try to align their personal, political and national interests.

I would also say that this is not necessarily an ‘American’ book. The challenges that Obama lists and the common aspirations of the people are a universal story and as applicable to us here in India as to the citizens of America.

Read more about ‘The Audacity of Hope’ on Goodreads. Buy the book here.

Title: The Audacity of Hope